The question that is going mostly unexamined by the Media is where are all of these people who are entering the country largely unprocessed, uneducated, and unskilled ending up once they get to Pass Go and collect $100 with a Get Out Of Jail Free Card? And maybe even more important, what segment of the legal domestic American population that is going to be most negatively affected by the unprecedented influx of these people? Even the most passive observer doesn’t have to search far for the answer. It is the one segment that votes robotically over 95% for the Democrat Party year after year after year – the black-American community.

END_OF_DOCUMENT_TOKEN_TO_BE_REPLACED 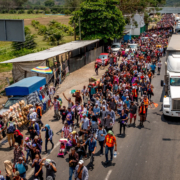 As yet another mass of immigrants are being organized to make the treacherous journey to America’s southern border, as reported by thegatewaypundit.com on January 11th, it will further illustrate just how much the illegal immigration crisis is more of a glaring illustration of America’s faltering moral compass.