Democrat Congresswoman Alexandria Ocasio-Cortez gives voice to socialism that would have been political suicide not too long ago.

How is it that Socialism is spreading in America today?  The short answer, because many of them know not of what they speak.  The government schools do not teach the difference between the social-economic systems of the world – capitalism, socialism, and communism.  If you were born in America during or post the Ronald Reagan presidency you have not heard the virtues of American capitalism boldly spoken by the president of the United States unapologetically.  The entertainment complex has been, particularly in the past ten years, instrumental in the minimization, degradation, and belittlement of Americanism throughout the nation culturally with impunity.  Can you imagine then-president Jimmy Carter or Bill Clinton openly traveling foreign nations and apologizing for America’s dominance since basically our creation or excoriating America’s founding principles and Fathers as Barack Obama did throughout his reign without any blowback, as well as get re-elected and still remain a political pop icon?  I would say, HELL NO!  Being openly socialist was still political suicide and socially repugnant to the vast majority of Americans, back then.

Today is a dramatically different America.  Reason.com recently in a report stated, “Americans ages 18 to 34 finds that 62 percent think “we need a strong government to handle today’s complex economic problems,” with just 35 percent saying “the free market can handle these problems without government being involved.’”  Stunningly it says that only 49 percent in this group hold a favorable opinion of capitalism.  What makes this so intellectually retarded is that this American capitalist style of free market is responsible for lifting more individuals out of poverty than ANY nation.  America rebuilt nations of Europe and Asia after both World Wars.  America is the nation that today millions of nation people are risking life and limb to cross shark-infested oceans and snake-infested deserts while being blasted by 100 degree heat and dealing with molesting criminals.  The fundamental ideal that one has the right to his or her labor and the freedom to do with it that he sees fit, or not, and therefore get paid for it, gives the human soul life and energy.  Ain’t no one trying to bust their way into Communist China, Russia, or socialist Cuba or Venezuela seeking economic freedom where all authority in truth originates with the government and where the government is the final determinant on how you should live and how much you can earn for your labor. Even according to citizenpath.com out of the top five nation for immigrant destinations, the most prominent social-democratic nations of the United Kingdom and Germany pale in immigrant population and destinations compared to the United States – it’s not even close [8 million-46 million immigrants].  To say that there is a severe separation of truth and fiction when it comes to the benefits of being an American and living in America compared to living in a communist or socialist nation, or even a nation that is largely economically socialist, but politically democratic, is more than a gross understatement.   Men innately want to be free.  We have to be mentally manipulated or physically confined to accept living under socialist or communist government systems.  Or be ignorant of the difference those two systems and capitalism.

Many Americans remember Obama declaring on the eve of his initial election to the Presidency of the United States, “the fundamental transformation of America”.  I say to you that he was not proclaiming the starting leg of America’s transformation from its fundamental tenets and principles of the nation’s founding and Founders, but the final one.  America has had a gigantic bull’s eye on her from those who do not want a successful challenge to their hold on individual freedoms and liberties since her creation.  America’s vivid exception to the previously accepted rule that man is encapable of governing him or her self and the government had to always be the master and provider for his or her existence has been the proverbial thorn in their sides.

The beginning of the 20th Century brought about the transformation of the American educational system from one of independent-based testing that encouraged critical thinking, to one based on standardized testing based on more structured conformance thinking and transformed history educational departments from teaching reverence-based education of the Founders and our system of government to one that today teaches very little of the Constitution, American Civics, or how our nation’s form of government has benefited the world, if it does at all. But arguably, what may have aided in the most psychologically disastrous transformation occurred on June 25, 1962, when the United States Supreme Court decided in Engel v. Vitale that a prayer approved by schools for use in schools violated the First Amendment by constituting an establishment of religion.  This ruling purposely and erroneously interpreted that the Constitution had a “Separation of Church and State” intent so that even the slightest illustration of anything that could be passively construed as expressing or exhibiting religion, particularly Christianity, had to be detached from not just government schools, but anything government.  Because in a true socialist or communist society man is to be our God.  Man is to be our provider.  And man is to be our savior, and executioner.  Christianity has to be not only removed from the public square, not just moved to the deep four corners of our home, but all reverence for Judeo-Christianity must be forever removed from our consciousness and disfavored. Because it is those principles and tenets of which this nation rests it’s Devine Providence.  It is what our Constitution and founding documents are based. And it is what makes our nation exceptional above all others.

Former president Ronald Reagan prophetically said, “Freedom is never more than one generation away from extinction. We didn’t pass it to our children in the bloodstream. It must be fought for, protected, and handed on for them to do the same… If we lose freedom here, there is no place to escape to. This is the last stand on earth.”  The seeds of socialism and communism can only grow healthy in the minds of our nation’s young because we, as generations that have come before them, have failed to pass the blessed knowledge of what freedom truly is and how, though it may not be easy, it is worth defending, fighting for, and protecting, because history shows us vividly that the alternative isn’t anything pleasant, at all. 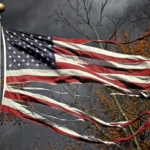