But if you were someone unaware of that infamous day’s events you would be hard-pressed to see any political, cultural or societal evidence that a group of Muslims with Saudi Arabian origin supposedly caused the worst terrorist attack on American soil, killing approximately 3,000 Americans on that day. Not to mention the over 8,000 U.S and coalition servicemen in the pursuant military actions in Afghanistan and Iraq, reported by CNN, and counting. And lets not forget the thousands of U.S Servicemen and women who were physically and mentally maimed for life.

Lets start with the fact the U.S Congress, at the dogged pleas and demands of the president, are on path to give, arguably the world’s number one sponsor of Islamic terrorism, Iran, over $140 Billion in frozen funds and virtually taking the cuffs off its nuclear power military industry, due to a recently signed Treaty Agreement. 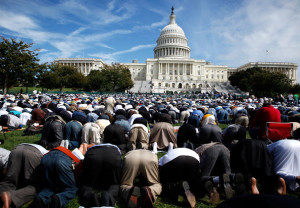 In 2013 Family Security Matters reported that Islam is the fastest growing religion in America. And is poised to be the dominant religion by 2050. Back in May of 2012 the Daily News reported the population of Muslims had more than doubled since September 11, 2001, by an astounding 67%. This report coincides with an earlier report by Voanews.com that stated an explosion in the growth of Mosque built throughout the nation. It reported, “The survey’s tally of 2,106 mosques marks a 74 percent increase since the year 2000, when 1,209 mosques were counted.”

Keep in mind that these are the same people and religion that just supposedly attacked and killed approximately 3,000 Americans and caused the United States to send thousands of mothers, fathers, sons, and daughters to die and suffer great and lasting injuries that a Harvard-Kennedy reports could run into the Trillions of dollars. The events of 9/11/2001 was presented as the excuse to turn a once relative calm Middle East into a dumpster fire with millions of fatherless and displaced families, decimated nation economies, and overthrown nation leaders.

The inexplicable nature of this domestic policy here, as well as that of Europe, of gross appeasement of the followers of Islam and Mohammadism grows. What should not be of any surprise is, in 2011 the Council on Foreign Relations, it defines itself as an independent, nonpartisan membership organization, think tank, and publisher, reported in its issue entitled Threat of Homegrown Islamist Terrorism, “that Between September 11, 2001, and the end of 2009, the U.S. government reported forty-six incidents of “domestic radicalization and recruitment to jihadist terrorism” that involved at least 125 people.” And this was before ISIS got on stage.

Lets not forget too that this nation’s Founders and Christian capitals of Europe for millennial have fought the spread of Islam for its incapability with Christendom.

All of this appears to be white noise to the policy makers in D.C even as we pause to remember the event of September 11, 2001, as News Max reports, “The United States is expected to quadruple the number of Syrian refugees it will admit into the country this year or next, as part of refugee program set up by the Obama administration….”The United States has admitted 524 Syrians since 2011. We’re likely to admit 1,000 to 2,000 Syrian refugees for permanent resettlement in Fiscal Year 2015 and a somewhat higher number, though still in the low thousands, in Fiscal Year 2016,” State Department spokeswoman Jen Psaki.”

Maybe we as Americans no longer care to remember what happened on that tragic day nearly 15 years ago, or have grown numb to the charade of those who have sworn to protect us and defend our Laws, due to the fact that many of us do not know what truly happened, nor why. Nor can many of us rationalize the government’s stated accounts, along with the Media’s co-signing, of what happened on that day, what and who caused it to happened, the cascading cost of lives and fortunes thereof.  And yet see that very same government being more concerned with those who carry the King James, as apposed to those carrying the Koran. And a government that is straining to give granny the third-degree at an airport so-called security line, as a woman wearing a Burka walks through virtually unmolested. and maybe too many of us have surrendered to the fact that there is something fundamentally wrong with what the government’s story of the days tragic events and it’s reactions to those supposedly responsible.

With so much emotional fervor surrounding this date ten years later there are still some serious questions still unanswered, such as:

I do believe that for all of the Americans who have given so much in blood, honor, and liberties due to this tragic event, deserve real honest answers.