Another year has come where hundreds and thousands of citizens of all ethnicities, particularly Black-American, rush to the crowds and Media camps to profess their love, devotion, and appreciation for the late 1960’s era Civil Rights icon, Martin Luther King, Jr. I just find it interesting that if one didn’t know any better, you would think that the only speech that Mr. King ever gave was the ‘I Have A Dream Speech” in 1963. Though that was the most witnessed of his speeches, in the shadows of the Lincoln Memorial, as he spoke, “I have a dream that my four little children will one day live in a nation where they will not be judged by the color of their skin but by the content of their character”. Is this the one that is the best transferable or relevant today – particularly as it has to do with the plight of blacks in America?

To strive for a nation of people who judge one another based on character content is a worthy aspiration to have. A good argument can be made that since Mr. King’s passing, some 40 plus years ago, America has made Herculean progress. But, according to a recent poll, over the past 6 years we have become more Balkinized over the differences of our skin color. But to me the discourse is the effect, rather than the cause. Which brings me to the speech of Mr. King’s that is more needed to be regurgitated at ad nauseam. It is the sermon that he gave some 10 years earlier to the one that is most celebrated in Montgomery, Alabama, called the “The Three Dimensions of a Complete Life.” It was in the sermon that I believe is most meaningful and pertinent today in which he said, “After one has discovered what he is called for, he should set out to do it with all of the power that he has in his system. He should seek to do it so well that the living, the dead, and the unborn could do it no better. Do it as if God almighty ordained you at this particular moment in history to do it. Whatever your life’s work is, never consider it insignificant. If it is for the uplifting of humanity, it has cosmic significant, however small it is. If you are called to a little job, seek to do it in a big way. If your life’s work is confined to the ordinary, seek to do it in an extraordinary way. If you discover that you are called to be a street sweeper, sweep streets like Michael Angelo painted pictures, like Beethoven composed music and like Shakespeare wrote poetry. Sweep streets so well that all the host of heaven and earth will have to pause and say, there lived a great street sweeper who swept his job well. This is what Douglas Mallock meant when he said: if you can’t be a pine on the top of the hill, be a scrub in the valley – but be the best little scrub by the side of the hill, be a bush if you can’t be a tree. If you can’t be a highway just be a trail. If you can’t be the sun be a star. It isn’t by size that you win or fail. Be the best of whatever you are. Set yourself earnestly to discover what you were made to do, and then set yourself earnestly to do it.”

It is in that sermon in which he was not referring to a “dream”, but rather life. He was not talking about “if” some external entity does “x”, then “y” would happen ,wishfully. In the Montgomery speech he spoke of LIFE. He spoke of the blessings of the Creator. He spoke of if each of us did, “x”, then “y” would likely happen. He spoke of what no one in public or in front of the Media cameras will say regarding today’s plight of American blacks – self-responsibility and tying one’s actions, whether they be positive or negative, to results that those actions may bring.  he spoke of one’s relationship to the Creator, not to government.

Just imagine if this was the speech, or quotes thereof, that were played, played, and played again during this celebration, as well throughout the year. The “Dream” speech can be arguably misconstrued as blacks in America waiting for some external entity, i.e., government, giving blacks something. Where as the “Life” speech talks about one doing the best at what they set out to do for themselves, by themselves, using the Creator endowed talent and skills that each of us have, no matter the measure. Where as the former may encourage dependency and an entitlement mindset, the latter encourages independence and self-responsibility.

The picture of the Ferguson’s of today’s America, and that of contagion of crippling under and non-employment of the blacks, in particular the youths, the picture of the gross disproportionate number of blacks in the penal system, and the picture of the epidemic of out-of-wedlock and single-parent households in the black-American community is the cause of too many of blacks staking too much in the “Dream”.  The “dream” that someone, or something, would do more for ourselves than we are willing to do for ourselves. If we one is not willing to hold him self up morally to seek to do the best job that he can do, how can he expect to gain employment or create a business? If one chooses to not to govern himself accordingly, how can he not expect to be governed by someone or something else?  How can one behave immorally and dishonorably, and yet expect just and honorable blessings?

To focus on a “dream” is to induce one to sleep. While to live “life” encourages one to be awake to take charge of his and her life choices, both good and bad. Imagine what a different picture of black America would be today. And imagine how truly great a celebration of this great man’s life we could have. 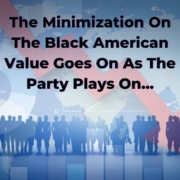 project third eye opened America, Where Is Your Outrage?!

May I simply just say what a relief to find an individual who
genuinely knows what they are discussing on the internet.
You actually know how to bring an issue to light and
make it important. More people have to check this
out and understand this side of your story. I was surprised
that you aren’t more popular since you most certainly possess the gift.

The guidelines you have given here are rather useful. It turned out such a fun surprise to see that looking forward to me when I woke up now. They are continually to the point plus easy to grasp. Thank you for the useful ideas you’ve got shared here.

What would we all do without the marvellous suggestions you share on this blog? Who comes with the persistence to deal with vital topics in the interest of common visitors like me? My spouse and i and my guys are very delighted to have your website among the ones we usually visit. Hopefully you know how much we love your working hard! Best wishes from us all.

2014: The Year The Truth Became Collateral Damage In The Degradation of Ame...Why Are We Not Looking At What The True Cause Of The Measles Outbreak?
Scroll to top wpDiscuz