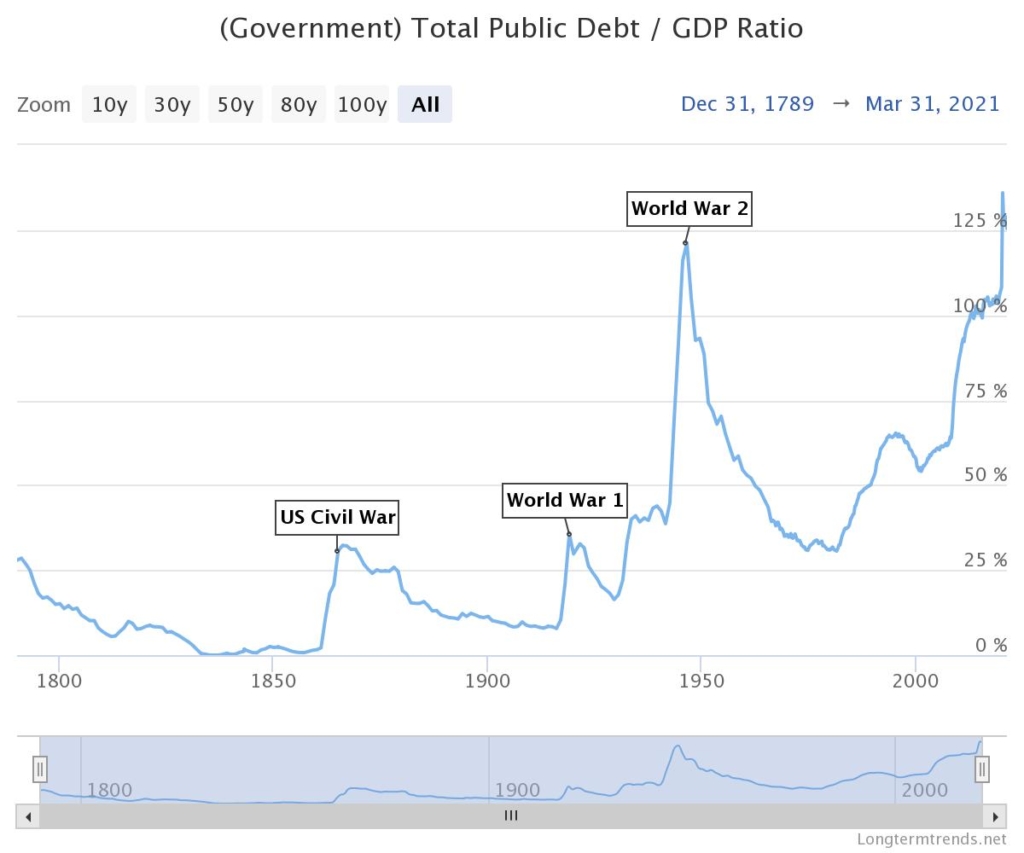 How many of you remember when the United States became a debtor nation in 1985 for the first time in 70 years?  In that year the U.S government’s debt was approx. $1,823,103,000,000 and 45% of GDP [Gross Domestic Product – the total value of goods produced and services provided in a country during one year].  In 2020 the debt of the United States was at an astonishing $27,748,000,000,000 and a grotesque 129% of GDP.  And this was before the nearly $2 Trillion “stimulus” bill that passed in Congress.  And this is not taking into account the $4 Trillion + of new debt that President Biden and the Democrats are seeking to strap to the backs of our nation’s future generations forever to come.  According to usdebtclock.org, the U.S debt is approx.. $28,800,000,000,000 – and counting.  This averages to approx.. $228,999 per taxpayer.  This is not looking at the TRUE debt of the U.S government that is approx… $84,804,000,000,000 [and counting] when you take into account unfunded liabilities [are debt obligations that do not have enough funds set aside to pay them. Most of the time, they refer to the U.S. government’s debts or pension plans and their impact on savings and investment securities].  Can you see the trouble coming over the not too distant horizon?  A very huge bill will be coming due.

The severe shame of the illiteracy regarding history that runs rampant through this nation is that too many of us cannot recognize similarities of important and relevant events that have occurred in the past when they appear in the present.  As Mark Twain said, “History doesn’t repeat itself but it often rhymes”. Too many of us are unaware that there is even a beat.

Too many of us do not know the relevancy and significance of the Brentwood Accords of 1944 and how that event relates to what is happening today. Many of us probably have not heard of it. Many of us cannot imagine our U.S Dollar not being accepted in almost every country on the planet, not just within the U.S and America.  Many of us do not know of a time when the U.S Dollar was not the world’s dominant currency.  Well, before 1944 that was the case.  After WW 2 the United States of America was the lone nation that had its economy wholly intact and had the ability to print it’s own money, via the Federal Reserve.  The Allied powers agreed to create a global monetary system in which the U.S Dollar would be dominant in place of gold and that the U.S Dollar would be accepted all over the world. A new world order was created.

It was agreed that in return for allowing the U.S to have the dominant currency the U.S promised to keep the dollar pegged to gold, within a standard of measure, which at the time it had the most gold in the world.  But, then the U.S overextended itself monetarily with its military involvement in Korea and Vietnam, high national unemployment, massive domestic government domestic social spending, pumping money into the economy, which caused inflation to spike, and the value of the dollar to drop expeditiously in relation to gold.  In essence, the world took notice of how irresponsible the U.S government was handling its finances and they took action in the form of demanding that instead of abiding by the Bentwood Accords and getting their currency redeemed in U.S Dollars, they wanted redemption in U.S gold. This caused a “run on the Treasury” by foreign Central Banks for U.S gold.  This all led to the Nixon canceling gold redemption and ending the “Gold Standard” for the U.S and the world.

Fast forward to today, the U.S debt-GDP is at an historic +125%, it is bringing in approximately $3,861,607,000,000 [and counting] in tax revenue and spends approximately $6,863,723,509,000.  There are approximately 11 million+ jobs unfilled and business owners begging for workers.  The government is attempting to force American workers to get injected with an experimental non-licensed drug causing many to quit their jobs and or not work.  All of this is causing business owners to close more businesses on top of the thousands of businesses that were forced to close due to the government-imposed lockdowns in response to the Covid-19 virus.  The current U.S Administration is seeking to grow the government to unprecedented size and reach with its proposed $3.1-5+ Trillion tax and spend bill, that will flood the economy with borrowed and printed dollars and disincentivize private economic growth and expansion, thereby crushing the value of the dollar and sending inflation through the roof.  Stop reading when any of this sounds horrifically familiar.

Though many Americans may not be caring about the financial ledger of the U.S government, you best believe that foreign governments and central banks do.  The inclusion of China’s Yuan to the prestigious SDR [Special Drawing Rights] basket of there before largely European democracies[the U.K, Germany, the European Union, the U.S, & Japan], which itself is an offshoot of the Brentwood Accords, in 2015 made it clear they will not be taken by surprise again being reliant on the U.S being fiscally responsible. The Accords made the U.S and America and the U.S Dollar dominant globally mainly due to the reality that there was no other nation to choose from.  That is not the case today. The world has matured economically.  China has been allowed to grow economically, as well as militarily, to directly challenge the U.S.  Nations, friend and foe, are decreasing trading in U.S Dollars and more trading in Chinese Yuans, even when it comes to trading in oil that used to be the exclusive purview of the United States, i.e.,petrodollars.  The world has options now.  The world is not going to let the U.S out of control spending be their demise.

If you were to take a step back and view the organized chaos and disruption that is going on in America, and that has been going on for decades, there is one constant, and that is the decimation of America as the dominant nation with our visualized model of what free and self-governing people can do. Americans exercise far fewer freedoms and liberties than ever before.  The government, both federal and national, has much more influence in the lives of Americans than ever before irrespective of what political party is in power. The federal government resembles more of a socialist or authoritarian/totalitarian form of government today than it has ever before.  And this has all happen in plain sight of the American people.

So, here we are. Another new world order is being created. Just as a drug addict [the U.S government] who the drug pusher has observed is unable to control his addiction to the point that he has to prepare to cut his best customer off and seek payment in the cherished heirlooms and priceless things of value and even their firstborn. The drug pusher has to get a customer that can be relied upon to pay, without an attitude.  But history warned us. which may be the reason that it is being rewritten. Thomas Jefferson warned, “And to preserve their [the nation’s children] independence, we must not let our rulers load us with perpetual debt. We must make our election between economy and liberty, or profusion and servitude.”  George Washington in his 1789 Inaugural Speech  prophetically said, “Until the people of America shall have lost all virtue: Until they shall have become totally insensible to the difference between freedom and slavery: Until they shall have been reduced to such poverty of spirit as to be willing to sell that pre-eminent blessing, the birthright of a freeman, for a mess of pottage: In short, until they have been found incapable of governing themselves and ripe for a master.”  Can you hear me now?

When In America It Is No Longer About The Love for God, Country, Nor Family... 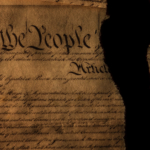 Covid Vaccine Tyrants Have Their Scopes Locked Onto America’s Childre...
Scroll to top